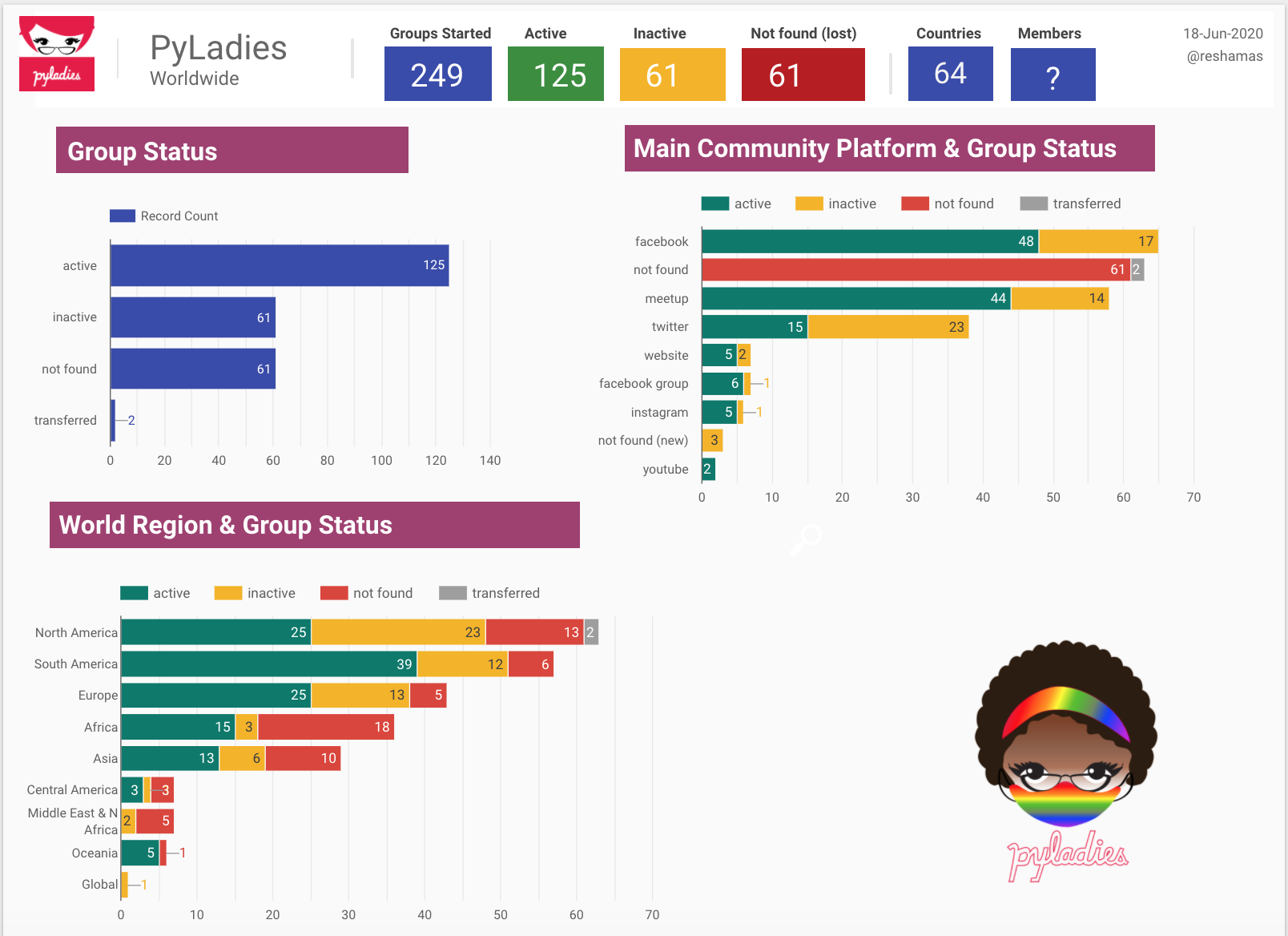 PyLadies is a global group that was created to involve more women in the Python open-source community. PyLadies was founded in 2011, with the first chapter being established in Los Angeles in April of that year. There is more background available in the PyLadies Wikipedia page.

The last Overview of PyLadies Chapters was published on November 24, 2018.

This summary provides an abbreviated update:

There are 249 chapters identified across 64 countries. Fifty percent of the chapters were identified as “active”, the rest are “inactive.” The chapter was categorized as “active” if there was any activity on one of the social media platforms within the past 12 months.

The following platforms were researched to discover existence of PyLadies chapters:

PyLadies groups around the world use various platforms to organize and communicate. These are some of the platforms:

This visualization shows number of chapters by country for the 20 countries with most chapters. 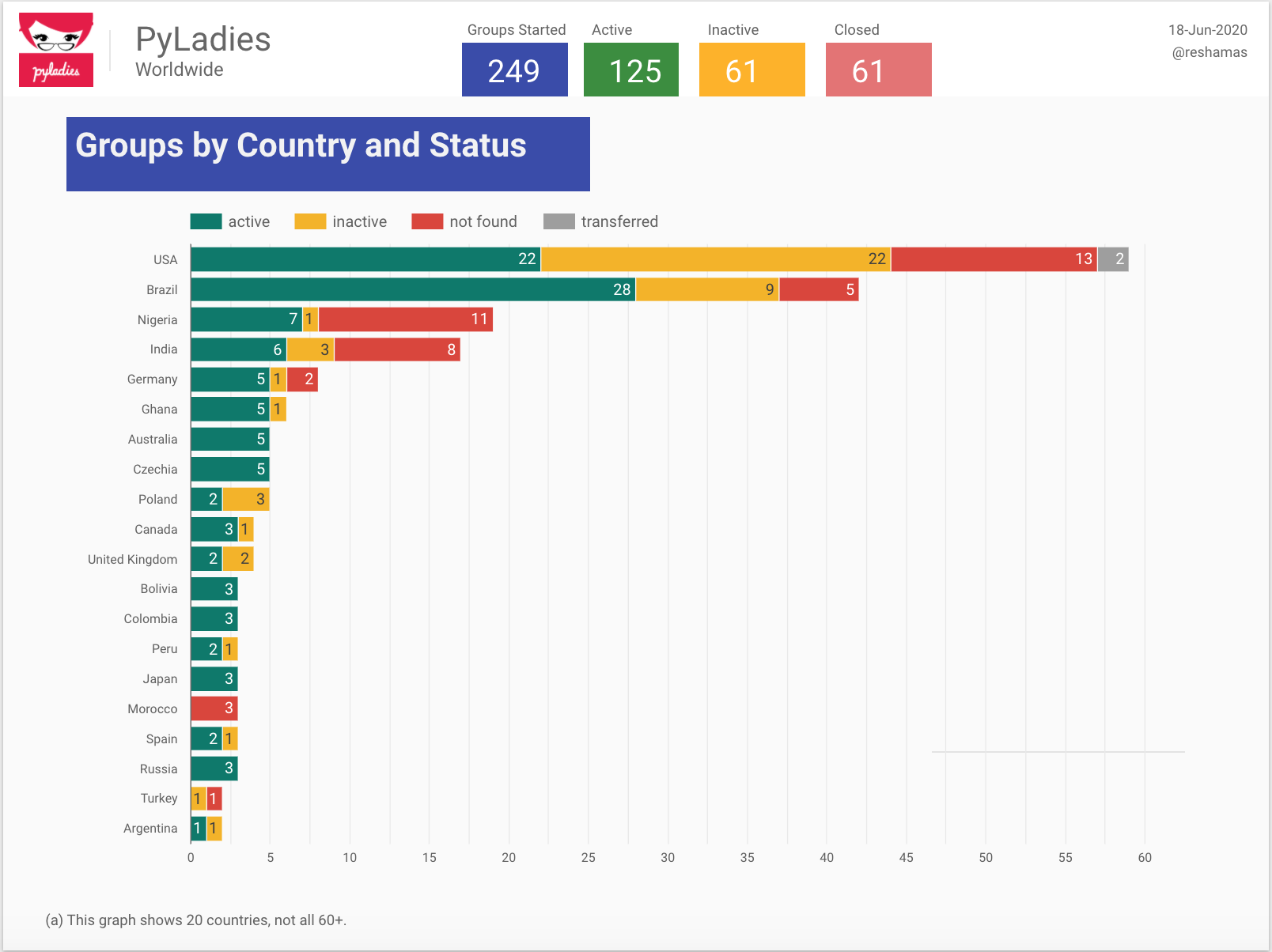 It was a fairly manual process and it would be preferable if could be automated. I tried using Facebook Graph API, but was not successful obtaining an API key.

PyLadies communities has opened more chapters than other community in that space, and they are most broadly represented in the world. There are also many chapters which are non-active.

Some chapters were dissolved, or rolled into other communities such as: Django Girls, Girl Develop It, general Python meetup groups, PyData meetup groups. 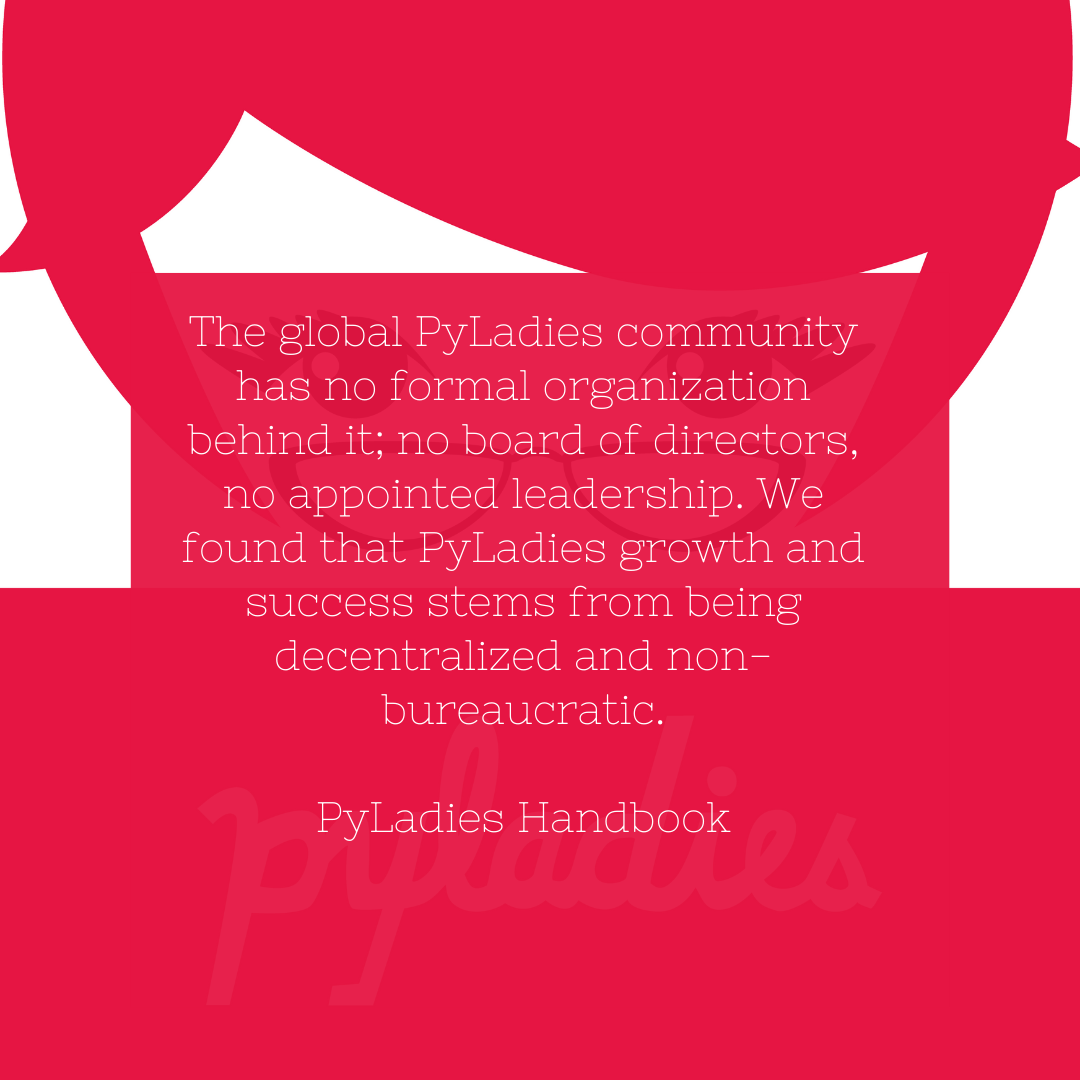 As this was a rather manual process, the first step was identifying how many chapters there were. Next steps would be to determine the membership in the “main platform” to ascertain how many members are in the community.

To start a new chapter:

If you have any questions, you can inquire on the PyLadies Slack. 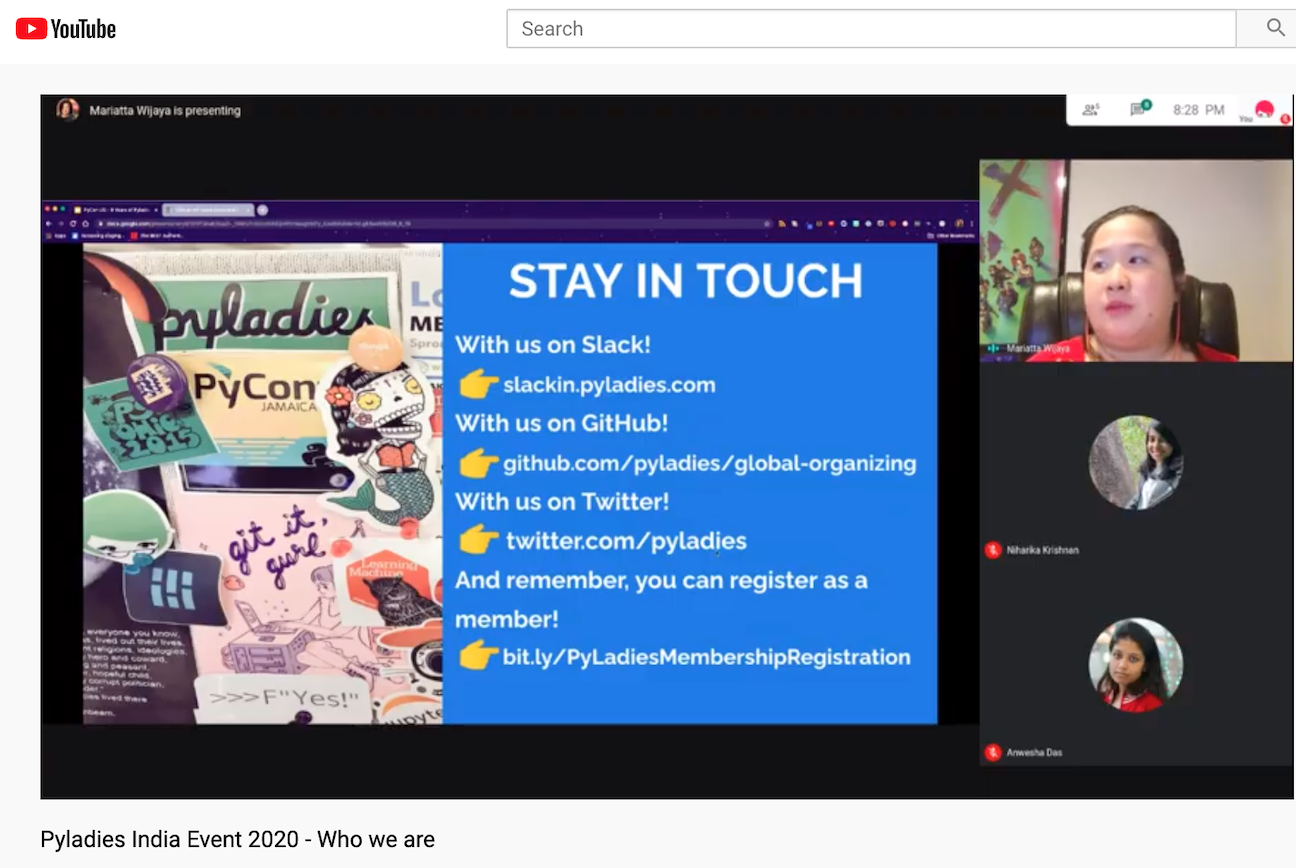 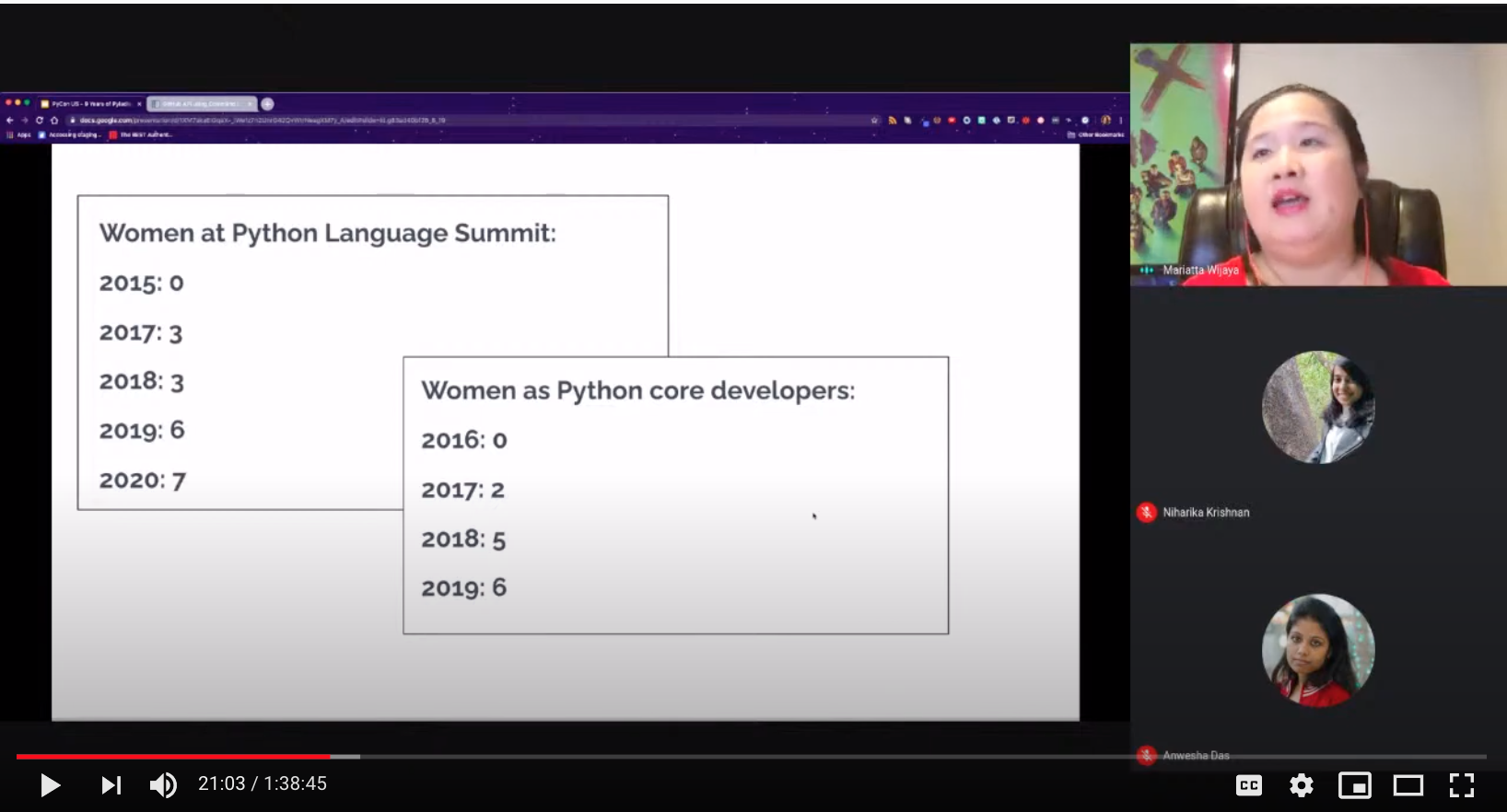 The Complexities Of Codes Of Conduct

How the Global Tech Community Is Coming Together for NODES 2020