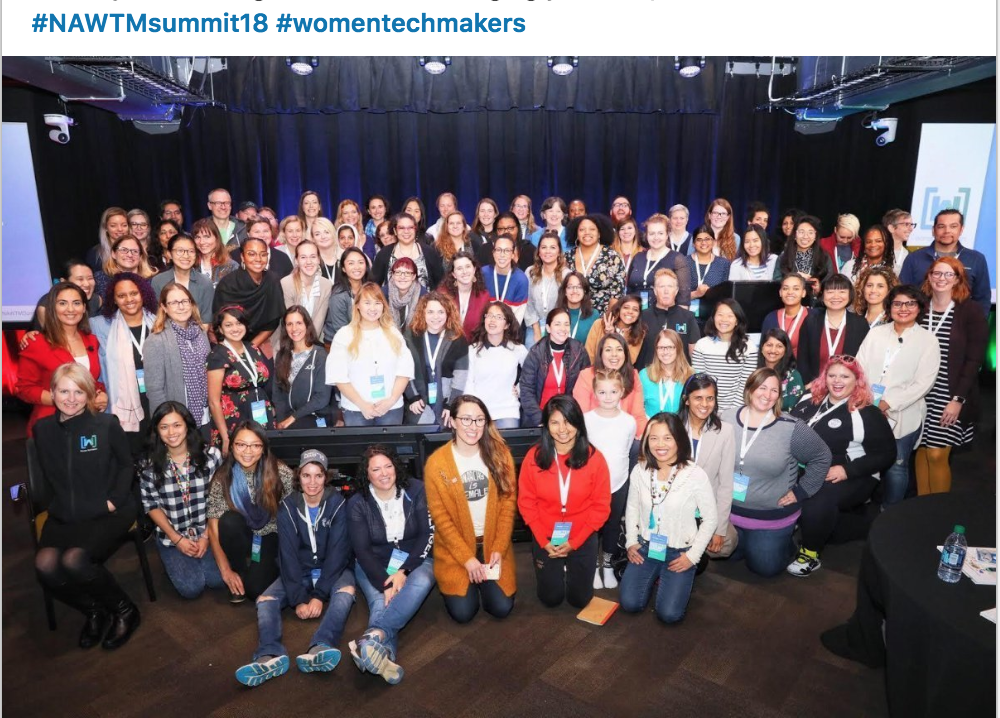 To what revolution are we referring?

What is one of the grassroots initiatives that will propel women in tech?

How will that happen?

Women Techmakers provides visibility, community, and resources for women in technology to drive participation and innovation in the field. They achieve this by hosting events, launching resources, and piloting new initiatives with communities and partners around the world. By joining Women Techmakers you’ll receive regular emails with access to resources, tools and opportunities from Google and Women Techmakers partnerships to support you in your career.

Filling out our membership form will ensure we’re able to tailor offerings to your needs and interests, which we will send to you via email. If you have any questions or suggestions, please email the Women Techmakers team at wtmmembership@google.com.

Join the movement: Membership empowers women in their careers by providing access to curated resources and events, as well as information and tools from Google, our partners, and the global tech ecosystem.

Attendance for the summit was by invitation to GDG organizers and some tech community group leaders. 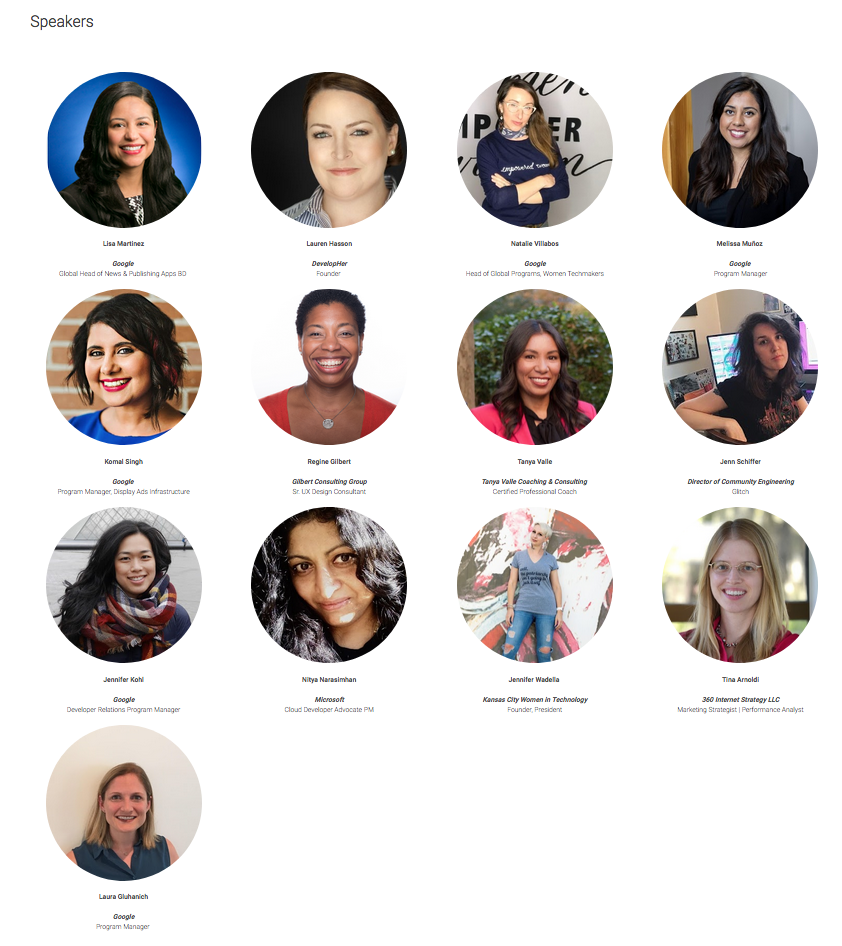 All of the speakers and talks were incredibly inspiring and informative. The content and delivery was at an unmatched level. Here are some highlights from the keynotes.

Kubra was the lead organizer of the event and emcee’d the program. 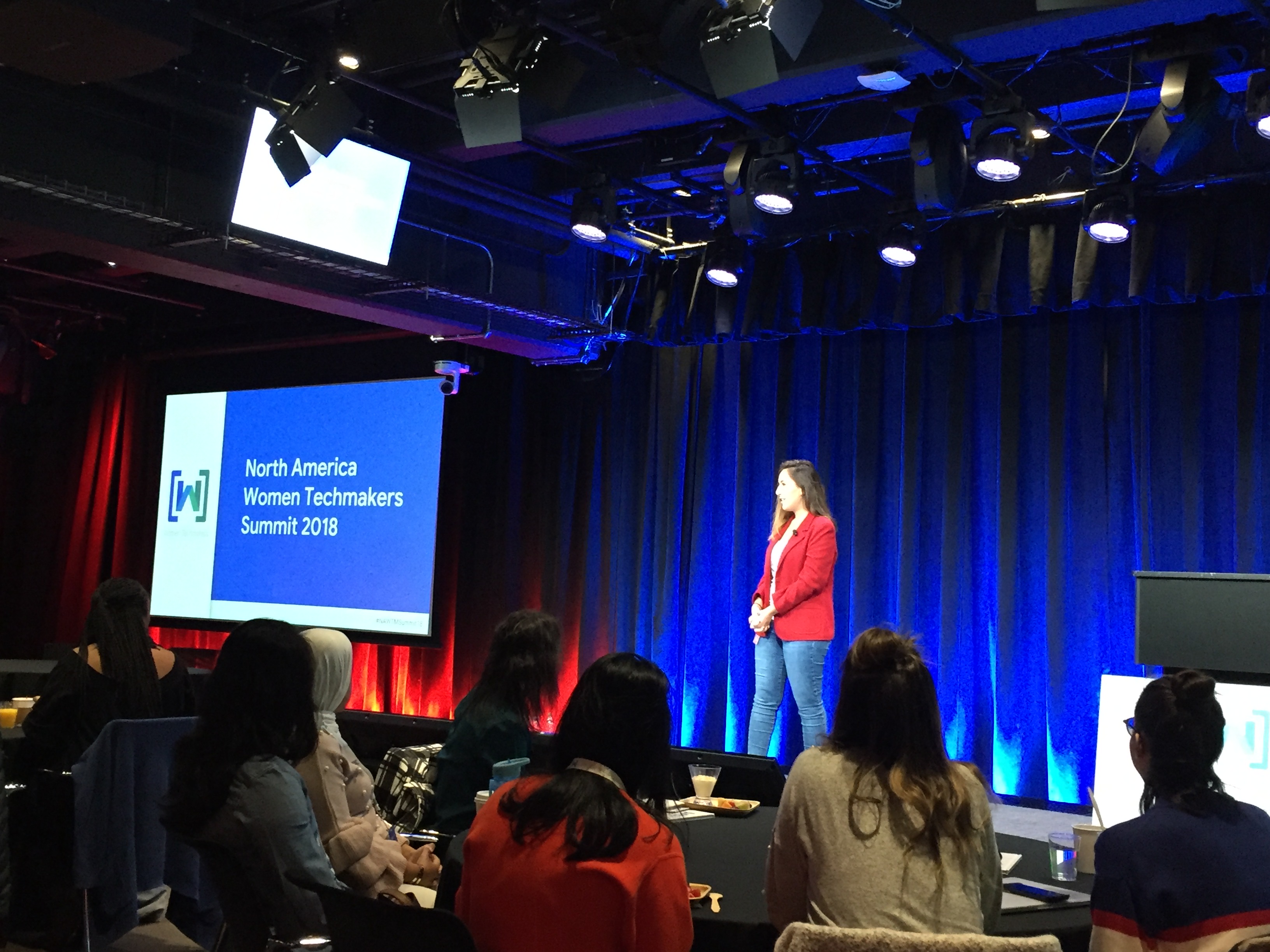 Thanks to the 80+ Leads, GDEs, and community members that joined us for the #NAWTMSummit18 today! It's been an incredible day of talks, ideas, and creativity 🙌🎉🗽 pic.twitter.com/vPgXS9XEs0

Lisa has worked at Google for nearly 15 years, in various technologies. She shared that at one point she went to work on Google AdWords because that was the “bread and butter” of the company, and she really wanted to understand it. Her experience and wisdom were enlightening and inspiring. These were my favorite shares from her talk:

To Be Bold at Google Means

Her advise to her younger self

Wish I had been more my authentic self.

Lauren is a full-time software engineer, and founded a company called DevelopHer to empower women to own their careers and negotiate their salaries. She told a breathtaking story of how she was grossly underpaid relative to a less experience male co-working who she was training. She did extensive research and tripled her base salary in less than 2 years!

Natalie has been at Google for 9 years and is the Global Head of Women Techmakers.

Natalie mentioned the phrase “The revolution will not be televised” as an analogy to the community events of empowering and advancing women in tech. Women Techmaker leads are having a significant impact on their community at the grassroots level, and that activity, leadership and programming will have a ripple effect to impact a million women positively. Women Techmakers will be the driver of that million with this advice:

.@nataliaenvy providing the state of the union of @WomenTechmakers - great news through WTM membership emails, WTM scholarships for learning and travel to tech summits and more. Awesome to hear of all the efforts! #nawtmsummit18 pic.twitter.com/rXHLZw0Kao

Nitya Narasimhan: Why It Matters / How to Get There (#FirstLadyOfTech)

on taking compliments: do as @nitya says not as she does#NAWTMSummit18 #WTM pic.twitter.com/dBmvTXtG5F

Jennifer Wadella: Hacking Your Work Life __ Balance To Take Over The World

Now listening to @likeOMGitsFEDAY talking about taking care of yourself and hacking your work/life balance! Dropping serious truths & advice.#nawtmsummit18 pic.twitter.com/MPSOq1xpGQ

🔥🔥 Quote of the day: "I'm a JavaScript Developer which means I have to learn a new framework more often than I get my period." @likeOMGitsFEDAY on Work/Volunteer Life Balance #hackyourbalance #NAWTMSummit18 @WomenTechmakers pic.twitter.com/DFxqoDtY32

Tina Arnoldi: A Digital Detox is Good for You - and Your Business 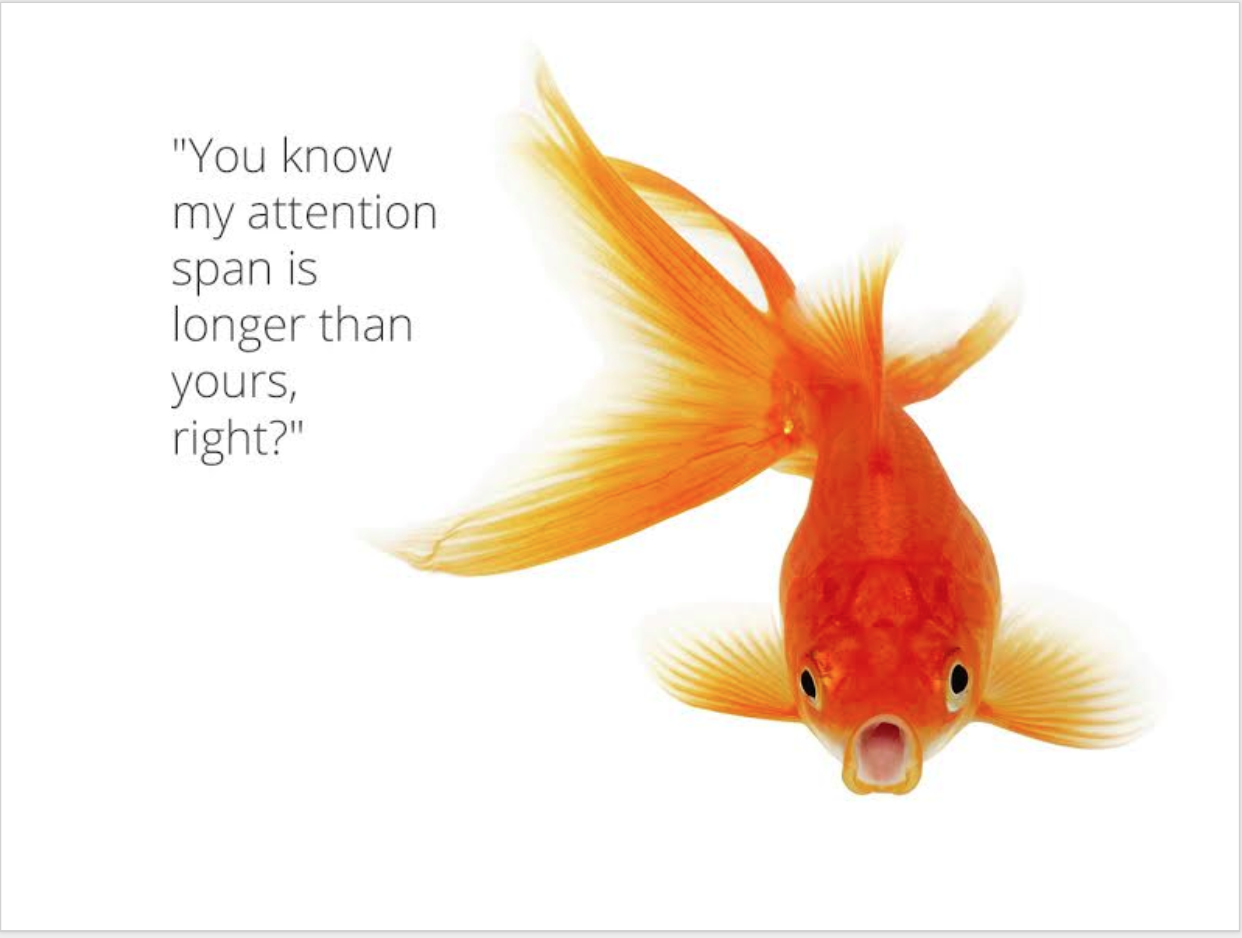 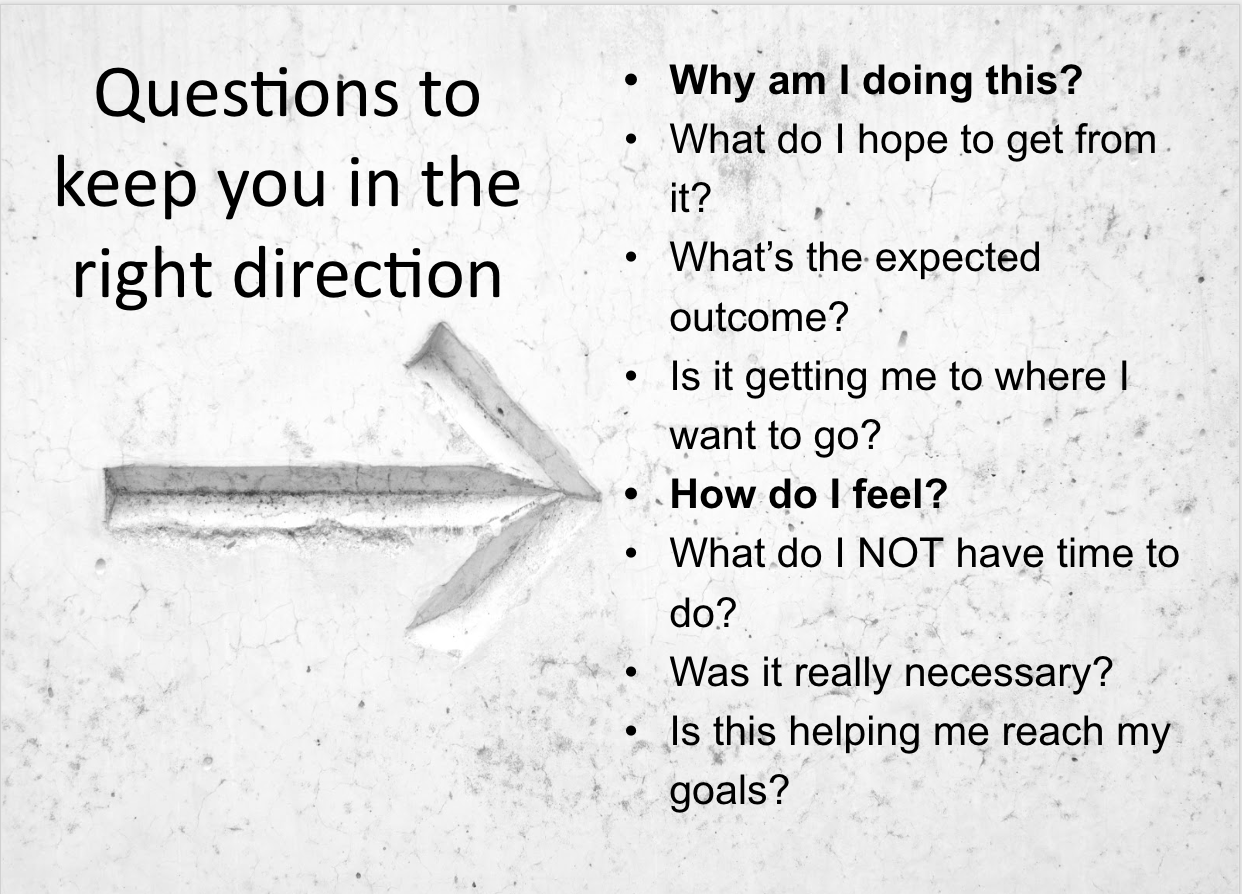 Tina has had one of the most non-linear paths in tech. She is a licensed professional counselor who transitioned into tech. Some great advice to manage our tech consumption in a more productive way:

My baby is starting to hear this week, and I’m happy that some of the first things it’s hearing are all these strong, inspirational women at the @WomenTechmakers summit #NAWTMSummit18

We're thrilled to have Komal Singh, author of @AraStarEngineer speaking at the #NAWTMsummit18 about bringing a passion project to launch 🎉👩🏽‍💻 pic.twitter.com/9amwhFJAES

@reg_inee “you don’t grow when everything is easy” live at this very moment and no regret #NAWTMSummit18 #womentechmakers #Empowerment pic.twitter.com/JFQvGgvjey

Art, technology, planned obsolescence, digial art shelf life ,non-consentual ephemerality. Racist machines and too much to put in one tweet.

"I always keep saying the worst thing that could happen to a white person is being called racist... Maybe if we keep doing it long enough we'll all break down and stop being complicit" @jennschiffer #NAWTMSummit18 #WTM

Excited to be a guest speaker at Google’s Women Techmakers Leads Summit! I’ll be talking about how to be a Mindful Leader of yourself and others—and why that matters. #nawtmsummit18 #mindfulness #compassionateleadership #leadership #careercoach #entrepreneur #womenintech pic.twitter.com/fVaDqdi9Ck

Got to love the energy in this room #NAWTMsummit18 pic.twitter.com/2cjz51yMXi

Thank you to Google and their team for creating this stellar event: